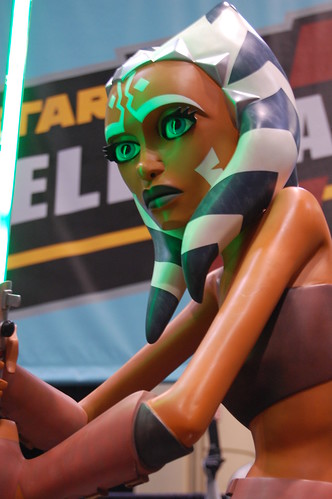 The best part about Clone Wars, hands down, is [[wiki:Ahsoka Tano]], Anakin’s padawan introduced by the series. She’s feisty, brash and hot-headed, like the prequels were desperately trying to make Anakin, but she’s also deeply moral and just and kind. She gives Anakin something to care about that’s not his horribly dysfunctional relationship with Padme. And she’s fun. Oh god, it’s so refreshing to have a Star Wars that’s fun again.

It’s not perfect. The Jedi are still inexplicably dumb. The politics, while amazing for being coherent and relatable, are clearly simplified for the kids watching. [[wiki:Legend of the Galactic Heroes]], this ain’t. And they almost completely avoid the mystical Jedi stuff, gloss over anything about what it means to fall to the Dark Side or how any of that stuff works, much like the prequels. With one notable (tho odd) exception. Which is a shame, because all that stuff is what I loved thinking about playing Knights of the Old Replublic or the West End Star Wars RPG.

I gotta say, I recommend it. Clone Wars made me love Star Wars again. And I’m really looking forward to [[wiki:Star Wars Rebels]].