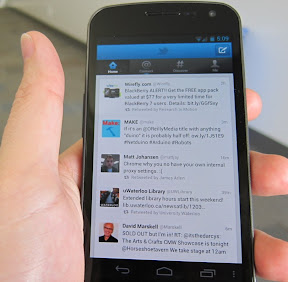 This is not the first time I’ve bought a smartphone. Back in 2004, I [did a bunch of research](http://flyingsquirrel.ca/squirrel/archive.php?article=197) and bought a Palm Tungsten W through Rogers.

Well, it’s been nearly seven years, which isn’t exactly never. But I bought a smartphone.

Keen observers of culture and technology will be the first to tell you that things have changed a bit in the meantime. Pretty much everyone I know has a smartphone. My *sisters* have smartphones.

Thing is, I have *wanted* access to email and IM ever since I held one of those LCD RIM email pager thingies back in 1998. But the combination and hatred and distrust of cellphone providers, coupled with a distate for the direction general purpose computing is being taken by device manufacturers has kept me out of the game.

This isn’t something I wanted to rush into. I’ve been thinking about it for months, mulling over the various options and trying to figure out what I’d be comfortable with.

The provider was a toss-up between Wind and Koodo. Koodo has the cheapest smartphone plan at $30/month with a sort of pay-as-you-go thing for data. But they’re tied to Telus, one of the Big Three cellphone providers in Canada (admittedly, the least offensive one, not that that’s saying much). Wind is a new entrant, and I have no small desire to help support new entrants in the market. Being new, however, they don’t have great coverage. Meaning I’d be without data service whenever I went home to Belleville.

For the phone, I really wanted something with a keyboard, but I also wanted to get the newest Android version, Ice Cream Sandwich. That, coupled with the recommendation of the awesome online comparison tool [Sortable](http://sortable.com) (and local startup), I decided to get the Galaxy Nexus.

Koodo doesn’t offer the Galaxy Nexus and it’s $600 unsubsidized, which tipped the balance towards Wind. And, honestly, not having to worry about data usage is pretty nice.

* A smartphone makes eating out alone slightly less socially awkward, but walking down the street slightly more.
* Twitter was made for smartphones, but I kinda knew that already.
* Podcasts work better this way, but podcast client software isn’t nearly as good as I’d like it to be. It’s better than my previous (mostly manual) process, and frustrating close to what I want, which makes the gaps that much more noticeable.
* Angry Birds Space! Woo!
* I miss having a physical keyboard. I’m using Swype, and it’s pretty cool, but auto-correct makes me sad.
* Another drawback of the Galaxy Nexus is the lack of an SD card and USB mass storage access. This probably isn’t a big deal to most people, but I like having access to file systems. And there are a whole bunch of apps that seem to expect you can access an SD card directly for import or export.
* Those are the only two faults I can find with the phone, really. I don’t have much to compare it to first hand, but it’s a great little machine.
* I’ll probably post a round-up of apps I like once I’ve done some more exploring.

A couple months ago, the Canonical Design Team asked for feedback on a [new multi-monitor Launcher set-up on their blog](http://design.canonical.com/2012/01/launcher-reveal-prototype/). People had complained that if you had a whole bunch of monitors, mousing all the way over to the top-left one to access the launcher was kind of annoying, so they wanted to do something about it. Fair enough.

I tried out their prototype. Their solution involved putting a launcher on every monitor. Okay, sure. But what surprised me was by default they caused the mouse to stop at the monitor boundary unless you move the mouse above a certain speed.

I didn’t like this very much. Good thing I was involved in the design process and caught it early! They asked for feedback in blog comments, so I left one.

Please, [I asked](http://design.canonical.com/2012/01/launcher-reveal-prototype/#comment-23596), provide a way for me to disable this feature. I don’t use the launcher very much and it’s more important to me that I can move smoothly and seamlessly between applications on different monitors. I like Unity because it gets out of my way and lets me work. This will get in my way.

I upgraded to beta1 today for the Global Jam. I was disappointed to see my request seems to have been ignored. So I’ve posted [a bug](https://bugs.launchpad.net/ayatana-design/+bug/946104). And I’ve changed the request slightly: please just give me a config setting somewhere that allows me to pass between monitors without being hindered. Maybe it’s really hard to implement an option to turn off per-monitor launchers and that’s why my suggestion was ignored. Who knows?

To illustrate the issue (since it’s easier to show than to explain), I made a short video using a two-monitor setup. It’s a bit rambly and could probably use editing, but I think it eventually gets the point across. Also, you probably want to watch it in at least 720p and full-screen.

PS: *To the Unity hataz*: I know that by posting something like this I’m going to get a tonne of “Unity/Canonical/Ubuntu/all y’all sucks!” and “You should use $FAVOURITE_WINDOW_MANAGER!” comments. I use Unity and I like it. I want to keep using Unity. Thanks, though. If you’ve found something you like better, great! Keep using it! I’m glad you’re happy with it. I’m aware of the alternatives. But maybe you could post your on your own blog saying that $FAVOURITE_WINDOW_MANAGER has some cool feature or other or some annoying bug you don’t like, and I can learn more about it that way. Maybe even with a cool video! That’d be great!

The new (http://www.omgubuntu.co.uk/2012/02/ubuntu-12-04-adds-new-video-lens-for-finding-movies-tv-shows-online/) in Ubuntu 12.04 features searchable content from across the Internet. It also shows region-specific content, like the BBC iPlayer if you’re in the UK.

Wouldn’t it be cool if the video lens gave Canadians access to videos from the [CBC](http://cbc.ca/), [CTV](http://ctv.ca/), [NFB animations and documentaries](http://nfb.ca/) or [Comedy Channel](http://thecomedynetwork.ca/) shows like [The Colbert Report](http://www.thecomedynetwork.ca/Shows/TheColbertReport)? I think it would!

Now, I foresee a number of possibly insurmountable problems from the start.

1. I have no idea how the Ubuntu video lens project is managed or how welcoming they are of contributions.
2. Or what sort of guidelines they’re looking at for adding content channels.
3. Or how ridiculously complicated they’ve made it to add new channels.
4. I will be very surprised if any of the above-mentioned sites have publicly-accessible APIs I’d likely need to support this.
5. Or what policies they might have that would that prevent using their content in this way.

Other than that, it should be easy!

Does anyone out there in Ubuntu Planet land have any suggestions or insight that might help overcoming the difficulties above? Comment here! Or poke me (dscassel) in #ubuntu-ca on Freenode.