It’s voting day! I’m kinda sad I didn’t get around to posting about amalgamation or the LRT, but neither of those issues are ending today, so there’ll be more time.

I’ve been particularly disappointed about how the campaign has turned around the LRT. The provincial government failed to come through with its promised commitment. The region will have to come up with the remaining $250 million (or thereabouts). Some wag did a back-of-the-envelope calculation and decided that that meant a 9.1% increase in property taxes to proceed.

Except no-one would ever agree to that. I don’t agree with that. I might be okay with a 9% increase in property taxes for myself to fund LRT, because I think it’s that important, but I’m not a senior on a fixed income the majority of whose wealth is tied up in their house.

So that would never happen. But increasing property taxes isn’t the only way a government can pay for things. And we aren’t dealing with a fixed price tag anyway. The plan can adapt.

I’m voting for the people who I think stand the best chance of building the region I most want to live in. Although I’m a bit sad that no-one except Ken Seiling has seriously stood up for the LRT plan they voted for. 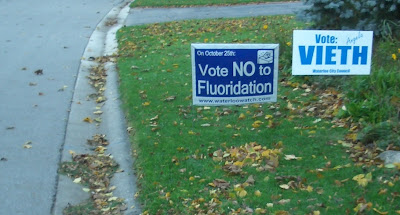 The mayoral race in Waterloo is probably the most interesting in the region. None of the candidates are perfect, but none of them are really that terrible either. But I’ve got to pick one, so…

This blog endorses Jan d’Ailly for Mayor of Waterloo

Honestly, I wouldn’t be upset if Brenda Halloran was re-elected. I like how she’s been able to reach out to groups like students and so forth. She’s a good, touchy-feely politician. But I don’t get a sense of substance from her. The pillar of her campaign four years ago was a promise to prevent development on the Waterloo Moraine. It was a promise should couldn’t keep. And she should have known she couldn’t keep it.

Jan d’Ailly is not nearly as touchy-feely as Mayor Halloran, but I feel he’d be a more effective manager. His take on the issues most closely aligns with mine out of the four candidates. He’s the only candidate who sees the long-term need for the LRT, even if it’s politically untenable to go ahead immediately. As councillor for Ward 6 (which encompasses Northdale), I’m not going to claim that Northdale has been expertly handled, but I respect the difficulty in having to deal with bad neighbours (not the students) using a lazy and gullible media to force council to change zoning in order to score a big payout from developers. He didn’t immediately cave to their selfish and disastrous demands. I respect that.

Dale Ross is the only candidate who I categorically would not want to have as mayor. His website headline states why more succinctly than I could: “I believe we need to fix what’s wrong before you can look to the future.” I think that’s a terrible attitude for a leader to have. But as conservative candidates go, he’s no Rob Ford. So there we can be grateful, I suppose.

Franklin Ramsoomair is probably my favourite candidate, even though I’m not going to vote for him (sorry, Franklin). His lawn signs have him rocking some kick-ass shades. His twitter feed is strange and wonderful. He’s a trained hypnotist. His son draws an awesome webcomic. All in all, awesome. But he opposes the LRT, so I’m afraid we’ll have to part company there.

I’d really like to get out to a debate, because I think it’d be fun to watch.

Municipal elections are a bit tricky. You don’t have parties to fall back on. You actually have to listen to the candidates and judge whether or not they’d be good in the job. You have to work a bit.

It’s even worse in Waterloo, where there are five different races I’m asked to weigh in on: Mayor, City Councillor (I liked “Alderman” better, but I suppose gender neutrality is good), Regional Chair, two Regional Councillors and three School Board Trustees. That’s a lot of people to sort out. And then there are two plebiscites this time ’round.

Little surprise, then, that voter turnout is somewhere in the neighbourhood of 25%.

I made the commitment, though, years ago, having made this place my home, to get more involved in local issues and local government. Politics I could live without, but it goes with the territory, I’m afraid.

I’d been hoping to get out to debates for all the races I have a say in and blog about them. The debate thing isn’t working out so well, with all the other things I have going on. I still want to talk about my process of coming to decisions, though.

It’s not so much to tell people who to vote for (although if I’m voting for them, I wouldn’t be offended if you did too), as it is just my way to encourage people to make up their own mind and participate in this process. That’s even supposing anyone’s reading. For me, doing this helps me sort out my decision-making process for myself.

I think democracy is important. I know a lot of people don’t particularly care about what happens at City Hall, so long as it doesn’t intrude on their lives too much. But I want this to be a great city. I think other people do too. It’s a little bit of work, but being informed about where you live and finding people to represent your values is a small thing that can help build the city you want to live in.

Also keep in mind that if you don’t vote, I can guarantee there are people who don’t share your values who are voting.

So get ready for a bunch of election-related posts. Unless I slack off and don’t get to them. And don’t worry, I only do this sort of thing during election time. It’ll all be over in a couple weeks, and then we can go back to our regular schedule of no posts.