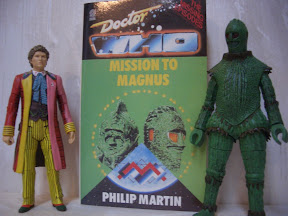 I ended up doing a lot of driving over the weekend, visiting people in Belleville and Ottawa and briefly crossing the border. Driving on long trips is the perfect environment for listening to Doctor Who audio dramas.

I’d caught up on the regular series with The Whispering Forest. And I’d made it all the way through the second series of Eighth Doctor and Lucy stories before I headed home. So I decided to pick up the audio adaptations of the Sixth Doctor’s missing Season 23.

As I’ve previously alluded, I really like the Sixth Doctor in audio. I like him on TV too (I like all Doctor Who, really), but I do find myself having to forgive it a bit here and there. The intent of these Lost Stories audios is to come as close to how the episodes would have appeared on television as possible. Which is fascinating, but not without drawbacks.

I spent nearly all of Mission to Magnus thinking I would have loved to have seen this on TV in the Eighties. It features the return of Sil, who’s always wonderfully portrayed by Nabil Shaban, and the Ice Warriors, albeit in more of a Seeds-of-Death-destroy-everything mode than in the more nuanced Peladon stories, but no matter.

The plot roughly entails a planet–Magnus–ruled by women, where a virus has killed off all men over the age of 20. The boys who are left are held underground and kept for breeding stock. Men from a rival planet of Salvak have discovered a cure for the virus and the women fear invasion. The Doctor gets involved as a consequence of a convoluted set of circumstances around the women trying to petition the Time Lords to let them break the Laws of Time and prevent the cure for the virus being found. Failing that, they (with the help of Sil) will steal a TARDIS and do it themselves. But Sil’s been double-dealing with the Ice Warriors, who want to take the women’s planet for themselves.

So a lot going on, and it could be a train wreck, but it mostly works. And through the whole thing I’m thinking “Hm, there seem to be some interesting gender politics going on here. I wonder how they’ll resolve that.”

And then I got to the end.

The Ice Warriors are defeated and the men from Salvak have arrived and they helped to Doctor to stop them. The virus that killed off the men has been wiped out by hand-wavey pseudo-science, so the boys we’ve met and sympathize with are now safe. The only thing that’s left is to deal with the ruling class of women.

The Rana frowned. “[…] We will mobilize. We will fight. We will never submit!”

Ishka stroked his beard. “How will you fight? With what? Your society is in disarray–it’s ruined. You will need our aid to rebuild. I will offer my services now.

Ishka shrugged, nodded and smiled. “Isn’t it obvious what I would be to you?”

A great laughter came from the two men, then they grinned at the women before them. “You will learn, ladies!” Ishka said. He and Dabasir guffawed again.

The women who rule this planet are nasty people and narrative justice is absolutely called for. But forced marriage and rape? All delivered with a sneering laugh? Really?!

To their credit, much the cast of the play spent a good chunk of the “CD Extras” interview segment apologizing for what was a “product of its time.” Big Finish has positioned this series as a warts-and-all revisiting of a lost era in the history of Doctor Who. So I can see their reluctance in changing things to meet with modern sensibilities.

But I don’t think that ending would have been palatable in 1985 either.

And it’s kind of a shame, because writer Philip Martin’s Vengeance on Varos is one of my favourite episodes of the original series. I think it has important things to say about entertainment and democracy that presaged cable news and reality TV. I’m not prone to overly feminist readings of things, but now I’m going to be watching his other episodes in that light. And feminist literary analysis can suck the fun out of anything.

I’m not angry or disgusted, but I am amazed that someone at some point thought this was a good idea. I love Big Finish and I’ll keep listening, but the Lost Stories series is already more… interesting?… than I was expecting.

One thought on “Mission to Magnus”